Some of my very favorite poetry is found in the songs people write. Songs tell stories of love and rejection. Some write about objects like trains or jet planes. Simon and Garfunkle wrote about the city of New York in Sound of Silence. On of my favorites is a song by Steve Goodman about a train they called the City of New Orleans.  The mix of  images and metaphors is wonderful, down to earth, and unforgettable. The music is just the icing on the cake!

Poems, and Prayers, and Promises blend with melodies and harmonies transporting us to other places and times with unforgettable lyrics. They share life as it really is as they connect to more than one part of the brain. Some of the greatest poets of our time are singer songwriters. Their songs can take us to locations and situations we have not visited in fifty years. Although many over the years considered country music repetitive and uncouth,  Merle Haggard was considered the Poet of the Common Man.  Perhaps the critics should take a second look… or listen and enjoy this train ride with Steve Goodman on the City of New Orleans. This is Americana and poetry at its best!

Connecting words with the heart

Song clip from You Tube

Today at d’verse Amaya asked us to think about music that touches our soul and brings tears to our eyes! I have been a lover of country music since I was a teenager. Traditional Country Music has always been embedded in the lives of the listeners. Listening to it is often like watching a reality show. Vince Gill gained fame in the early 1990s, and his song Go Rest High on that Mountain touches my soul like no other. He finished it after the death of his brother a couple of years earlier.

The clip above is from the funeral of George Jones, where he sings his classic song with Patty Loveless.  George Jones, a veteran of Classic Country Music, was a close friend of Vince. As you listen, you can’t help but get caught up in the intense emotion flowing from this song. It is truly one of the great songs of our time.

Inspiring our hearts // connecting us with God.

Tears flow as I listen to Go Rest High on the Montain;

Coming face to face with my mortality

Knowing at some time the center of focus will be me.

Empathy, pain, and grief all rolled into one;

A time of reflection past … present … and future

This is the official version of the song:

My country roots extend into that tall upright radio

Inherited from downstairs when a new one was purchased

With a big dial that crackled and popped when tuned

Mounted right behind the fabric in the bottom of the set

With a magnet so thick and so strong

It could pull the fillings right out of your teeth

Knobs and dials that can pick up shortwave and more

Signals from all around the world and in the U.S.

Wheeling, WVA and Fort Wayne, IN came in loud and clear

Saturday night meant I could listen to the WWVA Jamboree

On 40,000 Watts of Power coming over the airwaves

Learn to play the piano like the wonderful Floyd Cramer

Playing “Tennessee Waltz” and “Last Date” high on the keyboard

“And for $5.95 you too could own your very own Harmonica

Including an easy to follow instruction book with numbers to match”

Hooked I dreamed of one day playing music like that

Sounded so easy I took the bait sent in my money

A brown padded envelope addressed to me came in the mail

It had a cardboard box with a shiny ten-holed harp

Typewritten song book had songs like “Jesus Love of my Soul”

“You are My Sunshine” and “Irene Goodnight”

All with numbered notes some plain and some circled

Showing when to blow in or when draw out

Never did become very good even though I tried

Yes country music grabbed me at a young age

Dreamed of playing the guitar and finally got one

An old Stella that barely stayed in tune 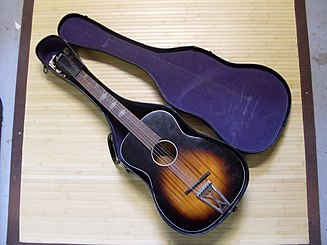 And Folk-Gospel songs from the heart

When I watch the specials on PBS

It still takes me back home

To that big old radio

And the WWVA Jamboree

Photo: from the history of the WWVA Jamboree