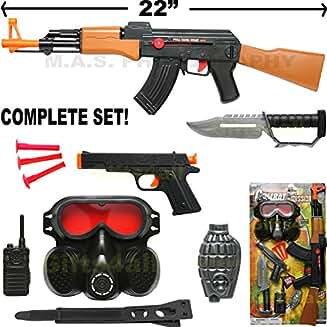 We are so contradictory in our affair with guns. On one hand we revere our American Heroes and buy our kids GI Joe toys and guns to play with, while telling them that guns are not to be pointed at anyone because they are so dangerous. We buy them video games of virtual reality that allows them to kill at will, and then tell them this is not real and they should never think of killing real people. We buy guns at gun shows and keep them in our house, and tell our children if anyone tries to break in we will shoot to kill. We watch our Hollywood heroes kill at will, but they are not to do the same. What are you teaching your children by word and by the toys and games you allow them to own?  Solutions solved by guns almost always end in death and collateral damage.

Gun Ad above can be seen at amazon.com